Originally, this was titled “My story about pants is better than yours,” which wouldn’t be very modest. But what I can promise is that this story is true.

A few years back, I arranged for a full day of meetings and a speech in Moorhead, Minnesota. I live about five hours away, just south of Saint Paul. The good news: I could stay with my Uncle in Moorhead the night before this full day of activity.

My Uncle Dave is a dentist and works lots of long shifts. He warned me that he would have to leave early the next day but I could stay and have breakfast and then simply lock up his house when I left.

I woke up the next day, and as promised, Uncle Dave was gone. I had plenty of time to get ready for my first appointment. I ate breakfast and the TV kept me company. The Olympics were on and I was half watching the screen and half getting dressed.

I pulled my pants on and closed the button at the top. I then went to zip up my pants. Here’s where things veered off course. The zipper just sort of fell apart. One half pulled away from the pants. I don’t think it was because I had gained weight recently or because of some surge of super strength as I was attempting to zip up my pants. The zipper just separated from the cloth. It broke, as things sometimes do.

This was my first-ever zipper malfunction. I’ve gotten them stuck on coats before, but never just had a zipper completely fall apart. I quickly took the pants off and studied the zipper. It looked like maybe it had originally been glued on, or maybe sewn. I couldn’t really tell.

I’ll just fix it, I thought. I’m not the handiest guy in the world, but I have fixed some things before. I’ve sharpened the blade on a lawn mower. I’ve regrouted showers. I’ve unclogged sinks. But I’ve never sewn anything.

Undeterred, I started poking around the strange house for the necessary sewing implements. I quickly ruled out the garage. Power tools wouldn’t help. After looking in a couple of bedrooms, I found it; the master craft room. My Aunt Sharon had a full supply of … well lots of crafting material, most of which I didn’t recognize. It looked like a smaller version of Michaels.

But I found sewing supplies and set about my clothing repair. I got a needle and some thread that looked like the right color and had my first tiny triumph when I literally threaded the needle (not as easy as one might think–hence the expression). 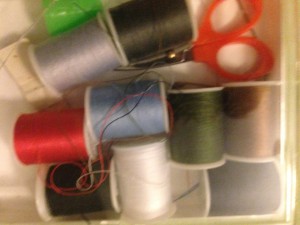 But within seconds, I realized that:

I reassessed. I found a Band-Aid (the 2nd round of unauthorized searching through the house) and stopped the bleeding. I then looked at the pants again. The zipper was just as hopeless as before. But now, the crotch of the pants was covered in blood. I suppose I could have soaked the pants in something to remove the blood, but I was starting to run out of time. My first meeting was now looming. And that still didn’t solve the zipper problem.

I toyed briefly with the idea of using safety pins to hold the zipper area together. While I was temporarily self-impressed with this problem solving approach, the overall image it evoked was less impressive. At best it would look just … wrong. At worst, it would fail and I would have a wardrobe malfunction that everyone would realize I knew about because I tried to solve it with visible safety pins. Imagine the conversation while giving a speech and someone politely points out:

“I know,” I shrugged, and did nothing to fix the problem.

That left duct tape. Maybe the garage did hold the answer to my problems. But, a shiny silver line of duct tape in the crotch area, while potentially acceptable in a superhero costume, doesn’t really fit with formal men’s business attire.

Next solution: Wear my other pants! The problem: I brought no other pants! I wore “basketball” shorts in the car. It was a warm time of year. There’s nothing cooler than a lawyer wearing a suit jacket, tie, dress shirt and … basketball shorts … throw on a backwards baseball cap and you’re guaranteed to make a winning first impression.

Could I go to a store and buy new pants? I knew there was a Walgreens nearby, but everything else was too far away. I’m sure the folks at Walgreens have answered dumber questions than: Where is the pants section?

And then I had the breakthrough. Uncle Dave is about as tall as me, maybe a little taller. So, I invaded my third technically uninvited space in their house; the master closet. I quickly found pants that actually fit—no rolling of the cuffs necessary. The color was close enough to my suit jacket that it wouldn’t look too strange.

But now I was out of time. I had to race out the door, while wearing another man’s pants. I made it to my first meeting, and went through the rest of the day in Uncle Dave’s pants and wearing a giant bandage on my finger. I gave a speech that day. I’ve given lots of speeches before, and even written some fairly well-received articles on how to give good speeches. I despise speakers who start off a speech with a canned, prepared joke (Three guys walk into a bar… How do you tell the difference between a flamingo and a telescope? …etc.). But I l personally love starting a speech with something funny, but extemporaneous. That day, I had my best opening line ever for any of the over 1,000 speeches I have ever given.

I raised my hand and asked, “How many people here are wearing someone else’s pants?” I then proceeded to tell the very-much-abridged version of this story, to the apparent delight (and possible discomfort) of the audience. Never in my long history of speech-giving were people more focused on my pants.

After my day’s activities, I needed to, of course, return the pants. I’m not sure what the proper gift is when you’ve borrowed someone’s pants without their explicit permission. But, my uncle loves golf, so I picked up a dozen golf balls (not the cheap kind, either…) and returned the pants and the golf balls and set them on his kitchen island with a note summarizing everything that happened. 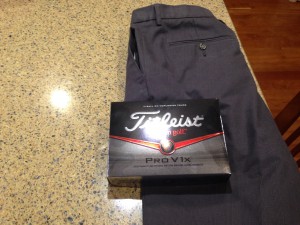 He seemed more than happy. He was very amused by the note and told me that if I give him a dozen Titleists, I’m welcome to borrow his pants anytime in the future. Did I learn anything? Sure. Every time I go out of town on business, I now bring back-up pants.